The Austin Seven Clubs Association is involved in relocating the Jack French Garage. Charlie Plain-Jones is leading the project and be contacted via cplainjonesaustin7@gmail.com

A date has now been fixed for the official opening of the Garage as on Sunday July 21st as the Bristol Austin 7 Club will be holding their annual gathering at the Atwell Wilson Museum too so a good attendance of A7s is assured.

Early in December Jeanine and I were delighted to have the opportunity to visit Graham Beckett and his crew of volunteers who are making great progress building a replica of Jack’s famous special, Simplicity.

‘Simplicity 2’ will form the centrepiece of the Garage exhibition and can be sat in with working controls visible to young visitors who can feel involved and learn the basics of how a car works.

The chassis is divided down the middle with the nearside as standard Austin components painted back and the offside as modified by Jack to lower and stiffen the handling and remove as much weight as possible, all the changes painted yellow which is exactly as per the original. In fact the chassis has been described as ‘a large array of holes strung together by the absolute minimum amount of metal’! This ‘divided personality’ has posed some technical issues for the team but as the picture shows these have now been resolved.

Graham currently competes in the original Simplicity so we can be assured that this replica will be as authentic as possible!

Undoubtedly Simplicity 2 will be a great centrepiece to the Jack French Garage and will hopefully ‘inform, educate and entertain’ to encourage younger visitors to take up Austin 7s as an exciting hobby.

We were delighted to welcome Roger, Jack French’s only son, wife Pat and their niece to the AWMM to inspect his father’s Garage which he had not seen for many years.
Both were surprised and delighted to see that it had not only survived in a much better shape than it had been for a very long time.

The memories came flooding back and when Roger sat down to record a ‘Living History’ for the A7CA archive he kept going for 1 hr 40 mins of fascinating recollections – all without a break! This recording has now been transferred to the Archivist who will be faced with the task of editing it down into manageable chunks…….

Roger and Pat hope to be able to return for a grand official opening of the Garage next year. 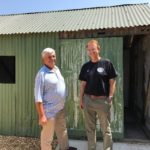 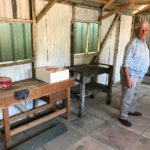 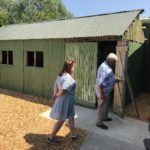 The major structural work is almost finished as the floor and pathways have now been completed by BC Building to a very high standard. The Museum directors are delighted with his work and it has been signed off and his invoice paid by the A7CA.

The remaining work to the external structure is:- 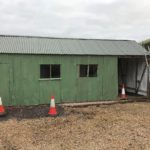 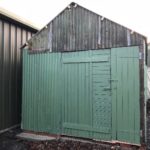 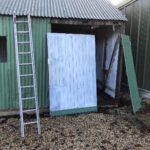 A quotation has been requested from the electricians who work closely with the Museum. This work to take place once the windows are in place.

The objective will be to keep the modern installation and lighting as discreet as possible to avoid distracting from the ‘period feel’ of the building and its exhibits. A combination of period hanging lights offered by the museum plus led spotlights will be controlled by a PIR switch to come one automatically when people enter the garage. A generous donation has been received which it is hoped will cover this work.