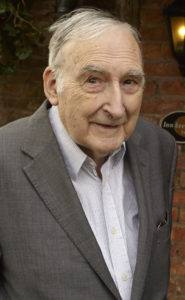 Bob Wyatt, President of the Austin Seven Clubs’ Association and also the Vintage Austin Register, died on Wednesday 27th March 2019 at the age of 87.
A man who led life to the full, he joined REME after WW11 and then took a life time career with the Automobile Association (AA).
Bob bought his first Austin, a 1922 Austin 12, in 1958 and which was instrumental in him forming the Vintage Austin Register.
One of his responsibilities at the AA entailed him ordering around 2000 of the new Minivans to replace the existing motorcycle combinations used by their patrol men, bringing him into contact with many of the personnel at Longbridge. This proved invaluable when Lord Stokes of British Leyland authorized the scrapping of all old Company records and historic vehicles. Over several trips Bob rescued much valuable archive material and several vehicles. This material assisted Bob in the writing of several books on Austins and the Austin Seven. Bob became an unofficial historian for the marque and this enthusiasm endured up to the end of his life
He supported the Association both by his presence at meetings and events, together his many kind donations of rare material to our Archives and funding projects.
It is hard to overstate what Bob did for the Association and the Austin movement. His memory will live on in the minds and on the bookshelves of enthusiasts everywhere. Very sadly missed, we send our condolences to his family and friends.

Bob’s funeral will take place on 15th April at All Saints’ Church, Wokingham, commencing at 11.30

There will be a procession which will include several Austins, including we hope Sevens, starting at 10.40