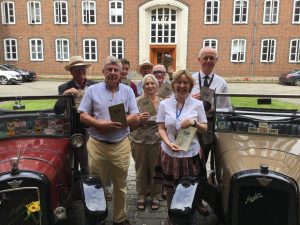 On Thursday 21st July 2016, members of the Archive Project were joined by staff from Hampshire County Council and Austin Seven Owners in Winchester for the handover of the first batch of digitised material.

This marks the beginning of the digitisation of materials from the Archive in Lubenham.

All the original material will be available for viewing at the Open Day in August.

Committee Meeting to be held at the Dun Cow, Dunchurch at 11am on Sunday 10th July 2016

Agenda can now be downloaded.

The Austin 7 Clubs Association Archive Project has a vacancy for a:

With the Project to digitise the Association Archive and publish it on the Web now gaining momentum, the Association is seeking to fill the volunteer post of ‘Digital Archivist’. This exciting new post will have the responsibilities of curating of the Digital collection, identifying original materials for digitisation, managing the digitisation process and to maintain a catalogue of the Archive contents.

The successful candidate will have excellent communication and computer skills and likely have a background in Archive management, library or IT disciplines.

For further details and a job description, please contact

The next A7CA AGM is to be held at The British Motor Museum, Gaydon, on Sunday 10th April 2016.  The Agenda is now available to download.

The Agenda for the meeting on Sunday 10th January 2016 is now available to download.

The meeting started with Phil giving the group a brief background of the Archive and Faye’s earlier involvement. 2007 saw the move from a collection housed at Phil’s home to the more appropriate surroundings of rooms at the TSSC Offices in Lubenham. At that time, Faye provided advice and guidance as to the way the Archive should initially be housed. Since then, the collection has been moved to different rooms in the complex due to changing needs of the TSSC. The current interest in the Archive has been brought about as a result of a burst pipe and subsequent flood that damaged some of the collection. The main thrusts of the discussion were along 3 lines:

A brief discussion highlighted previous thinking around a permanent home for the Collection. Consideration had been given to Beaulieu, which was initially discounted for reasons of its geographic position, Gaydon, discounted because any items lodged there have to be gifted to the Museum and cease to be in the control of the Association and Coventry, which was considered to have similar issues as Gaydon. Further thinking is to be done around a suitable long term home for the collection.
We were lucky with the flood and not a huge amount of damage was sustained (and for some of the more important pieces, only minor water staining) In an attempt to be helpful, Staff of the TSSC had moved the collection to various other rooms in the building which has left the collection somewhat disorganised state.

The group asked Faye to offer her views on the position the Archive was now in and the next steps required. She made the following points:

Store everything in boxes where possible. These should not be plastic but Archive quality Cardboard boxes. As a very rough estimate £5 – 7,000 might be required for appropriate storage for everything. It was also suggested that for such things as Handbook collections etc, it would be better to get boxes made to suit. FM gave advice as to potential sources of supply (Conservation by Design, Preservation Equipment Ltd., Oxford Bodleian Library)

The group then discussed tasks required and their likely order. These were identified as follows:

The creation of the actual spreadsheet catalogue entry was discussed. It was suggested that Phil and others would best spend their time ordering the collection into different sections and that the actual entering of data should be undertaken by an ‘Administrator’ with computer literacy, a good deal of common sense and an eye for detail. This person could work, perhaps, whilst Phil and other were at the Archive so could offer guidance to the Administrator when there was doubt. Austin 7 experts may not be the best people for the job as they might get side-tracked.

Digital copying of archive material was discussed and a number of points of best practice were highlighted by Faye. It was suggested that sub-contracting this out to a professional may be helpful as the quality would be high and time taken short. (Capita at Bicester were given as an example of a firm who could undertake this work) This would, of course, have a financial aspect the Association would have to consider. Any text document scanned to PDF should be scanned using Optical Character Recognition (OCR) to give files that could be searched for key words. Suggested prices per image for flat bed scanning are 18p per page, and 26p per image for V support scanning (for bound publications, for example). Images should be held as .TIFF files, as they are ‘lossless’ records of the image. .JPEG files are slightly less detailed but are fine for day to day work.
Copyright Issues were discussed with particular bearing on the ultimate aim of publishing the Archive contents on the Web. A recent book on the subject would give helpful guidance – Copyright for Archives by Tim Padfield (see appendix)

Faye also suggested we should have a standard ‘Donation Form’ to be filled out when the Archive receives donation. Faye will provide Phil with a sample (Action FM)

The Trophies (and other memorabilia) should be photographed immediately. Phil will pursue this. The Jeweller that we used for Insurance valuation purposes should already have some photographs. The rest of the collection will be photographed now. Nick Turley has offered his professional services in this regard. It is intended that this collection of photos should be published to the Web as soon as possible (Assoc Web Master to be involved here)
The Works Index cards are a matter of priority. It is thought they may have already been copied by Ian Moore. Phil to follow this up (Action PB)

To prevent any fading of items, all windows should be covered with UV filter material (Action PB)

Andy, in his capacity as Assoc Chair, will write to Faye’s Boss, formally thanking him for her time today. We also suggested we would be prepared to make input on Swallow history where we had information the Jaguar Archive did not. (Action AL)

These minutes will be published but PB will draft a report to be published to cover everything between the day of the flood and now. Reports will be published on a monthly basis in future.
Next meeting to be held Thursday 19th November at 09:30 to review progress
By the next meeting we hope that the following tasks have been completed:
The collection has been reorganised and moved away from ‘danger’ areas

In the next meeting, more serious discussion can then be had on the next steps of creating the catalogue and the possibility of employing professional services
Hugh Barnes 15/10/2015
Appendix:
Archive Material Providers
Conservation by Design
http://www.conservation-by-design.com/home.aspx?pagename=home
Preservation Equipment Ltd
https://www.preservationequipment.com/
Bodleian
http://www.bodleian.ox.ac.uk/using/pads

Transferring to CD/DVD
It is recommended using gold discs, which avoid the rapid ageing/decay of commercial discs:
https://www.preservationequipment.com/Store/Products/Archival-Storage/CD-$4-Digital-Storage/Kodak-Gold-CD-

The minutes are now available for the October 2015 meeting held at the Heritage Motor Museum.

Also note the July 2015 minutes have also been updated.