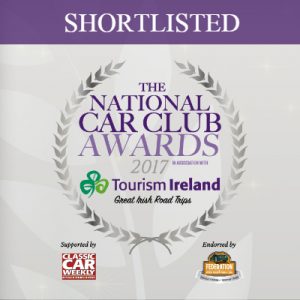 • Finalists revealed in eight of the 16 award categories

• Six awards to be decided at Practical Classics Classic Car &

The finalists in the 2017 National Car Club Awards, in association with Tourism Ireland, have been revealed. This year has seen the most nominations from clubs and club members to date.

Supported by Classic Car Weekly, and endorsed by the Federation of British Historic Vehicle Clubs, the overall Award winners will be announced at the awards dinner on Saturday 1st April at Birmingham’s NEC.

Lee Masters, Director of The National Car Club Awards, said: “We had 209 nominations, which is 25 more than the inaugural year and it’s fantastic to see the clubs embrace these awards. Once again, the standard of entries was extremely high with a fantastic mix of clubs of all sizes. “Some of the categories had over 30 entries and reducing these down to a shortlist was extremely difficult, making that place on the shortlist even more valuable and an incredible achievement.”

A total of 16 awards will be presented at the glittering ceremony, hosted by Mike Brewer alongside the Practical Classics Classic Car & Restoration Show. The shortlist covers eight of the award categories with the finalists for the Lifetime Achievement award still to be decided. The other six awards will be decided by the judges on Saturday and presented their prize at the awards dinner. There will then be a ‘Judges Special Recognition Award’ presented to a club that the panel feel has gone the extra mile in the classic motoring movement. Two members from every club shortlisted for an award have been invited to attend as guests of the National Car Club Awards and Tourism Ireland and will be treated to a drinks reception and a complimentary three-course dinner. Further tickets will be on sale for those wishing to attend. For more information, visit www.nationalcarclubawards.com